A Whangarei writer says ‘working class’ experiences he has had since moving to Northland inspired his latest short story collection. 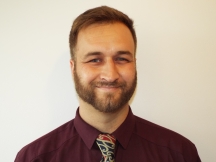 Lowlife has a thoroughly Northland flavour to it, featuring a unique “gang patch” cover stitched by Whangarei’s Headrush Custom Caps and photographed at The Old Butter Factory.

Lowlife is literary fiction; the style is often described as ‘dirty realism.’

“I’ve had lots of hairy experiences in my life; some of those have been in Northland, like getting stuck in a Kaitaia flophouse, almost crashing a ride-on lawnmower gardening at a mansion on Kamo, or doing drug surveys with armed robbers in the Whangarei police cells,” the 33 year old says. “So the Lowlife stories aren’t only about Northland milieu – they’re about people stuck in conflict trying to work their way out of it, trying to make their lives better.” 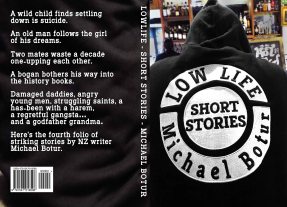 “My characters often share frustrations with me as we both try to make our lives better in a part of the country where there’s not much money circulating. Buying a cheap house in Tikipunga and trying to escape Generation Rent has been a particularly big influence on me. That’s a class conflict thing, and class conflict is a big theme in the stories.”

“Northland has the lowest median income in NZ, so it’s no surprise a lack of money motivates plenty of characters in my stories. Throughout my twenties it was always hand-to-mouth for me and my wife – that’s a struggle most young people share whether you have the privilege of tertiary education or not.”

Botur says all stories come from a kernel, which may be a quote, a character or an event.

“One Friday afternoon in Cameron Street Mall in Whangarei I watched two CitySafe security guards chasing a young man, a shoplifter. I followed beside him in my car as he sprinted through a carpark. I didn’t have the heart – or the balls – to catch the guy, even though I could have blocked his escape. Later that night I went to my data collection job at the Whangarei Police Station (interviewing arrestees about their drug use). I made small talk with the cops on duty about tailing the shoplifter. They asked me if I tackled the shoplifter to stop him and I struggled to explain that I didn’t have the heart to make life worse for a young person who was probably down on his luck and desperate. The cops seemed unimpressed about that. All the politics that came into play there inspired a story, Wonder Woman, which is in the collection.”

Another story, Survive September, is about the difficulty parents get into when they need to work low-paying, low-skilled jobs, and then get hit with a big daycare bill every week, Botur explains. “When I first moved to Northland in April 2015, I couldn’t afford to put my one year old daughter in daycare, because daycare isn’t subsidised until kids turn 3. I was stuck at home with her, feeling useless. There are virtually no work-from-home jobs in Northland. So that story is in honour of all the stay-at-home dads out there who are desperate to earn more income but have to be there for their babies.”

“I have done innumerable days of $15-an-hour labouring work over the past few years while building up a good portfolio/CV so I feel deep empathy with people who struggle to earn the ‘living wage’ of $20 per hour – a struggle which, unfortunately, is more acute in Northland.”

“When I had little paid writing work in Northland, I even had to work a few shifts at The Warehouse in Whangarei, including stocktaking for ten hours some nights, and that unreal experience inspired another story in this collection.”

Lowlife is available from Amazon.com and www.NZShortStories.com