A fourth-generation farmer with no one to inherit his farm; a daughter concerned about her aged father going to Antarctica; college kids pumping gas; a clash of cultures in Turkey; an office cleaner who discovers something unethical in a file … These situations, and others the characters in Karen Phillips’ stories find themselves in, are familiar to us all. The ways they come to terms with them are explored with empathy and an understanding of human nature. 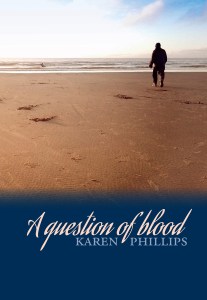 Karen Phillips began writing in 2009, winning the BNZ Katherine Mansfield Novice Award that year. Since then her short stories have achieved success in other competitions and have been published in Takahē and Flash Frontier. She lives on a hill overlooking the beach at Ahipara with her husband, two cats, twenty olive trees and sometimes a big, black Labrador dog. This is her first collection of stories.

Each generation bridges a gulf between the generations before and after it and I would say that the baby boomer generation have had the most uncomfortable stretch yet. Their fingertips touch both survivors of economic depression and war at one end and babes of the constantly- connected, materially over-stimulated world of the 21st century at the other. Karen Phillips, in her collection of short stories, “A Question of Blood”, subtly references many of the attitude shifts over this time. For instance, I was relieved to find that a woman who was shunned by her community after falling for a married man in “Flame” had finally found happiness in her old age. The narrator of the story comments, “We were so hard on Theresa. It seems so unfair now,” followed by “Steve doesn’t answer and the words float in the silence of the car because that’s how it was.” Post-Weinstein we can see that the romantic vision of the scarlet woman, erring in sincerity and being severely punished for it, is coming from a much more innocent time and place than we currently inhabit.

Phillips shows us a range of the sort of people we might run into down the main street of small town New Zealand.  She gives us credible scenarios and multigenerational players in the kind of communities that don’t generally hit the headlines. Her use of dialogue in a story like “Crossroads” featuring Zoe and Dion, lets the soon-to-be dad Dion say it all with, “I work every hour I can get and I never go out with the boys and I never have any money with all that shit you’re buying.” Even with this, Dion is not demonised, just left to retreat to Australia while Zoe’s mum backs her daughter and quietly ensures that the story becomes one of triumph.

Family members work overseas and bring their own baggage into the stories; Paul in “The distance from home” and the absent Pete of “On their own”, who is looking for work in Perth. Pete is defined mainly by the negative space he has left in his young family and his loathing for the crows of Perth, “the early morning squawking of those ugly black birds”.  Paul returns to rural New Zealand after his mother’s death and his action of fixing a window at the back of the bach is loaded with the sadness of being away from New Zealand, inadvertently permanently. These stories carry some of the sense of dislocation that has come inevitably with increased opportunities and financial aspirations over recent times.

The last story in the collection is perfectly placed as it puts Phillips’ characters into perspective as temporary and hapless wanderers within a landscape which is enduring and enigmatic. This can be retrospectively applied to the whole collection, a reminder, perhaps, of our own mortality and unimportance. Phillips’ imagery of a peninsula in “warrior pose” heralds the story of a woman who has joined a walking group. Her own anxiety about events of the day as well as her recent move to be with her daughter’s family is both highlighted and marginalised. “That land erases everything it doesn’t want. If someone died there the body would just disappear.” The story serves as a classical reminder of our own mortality after the parade of small and worrisome scenarios throughout the collection. The coastal land of Tai Tokerau is recognisable in the last few lines “The bent knee of another ridge angles down to a small sandy beach, the only flat land visible. The beach is empty, access to it blocked by the rocky foot of land holding the heaving surf at bay.  The peninsula lies in warrior pose, protecting the teeming life within.”

Phillips’ stories stretch from one end of the generational spectrum to the other with a hard hearted grandfather of the title story contrasting with the acceptance and support shown around the birth of Zoe’s son Jason. Phillips sketches situations lightly and then leaves them, so that the reader is left with a feeling of having had a brief and intense connection to the heartland of our country. The personification of the bush covered peninsula at the end of the collection should give us pause to reflect on our own communities and what we ourselves bring to the table.

Catherine McNamara lives in Tikipunga and recently completed a Master of Creative Writing from AUT. Writing is currently on the back burner but reading is still very much in the picture.